In 2004 the National Endowment for the Arts created the program Operation Homecoming to help U.S. troops and their families write about their wartime experiences. Through this program, distinguished American writers conducted workshops at military installations and veterans’ centers which, combined with an open call for submissions, resulted in 12,000 pa...ges of contemporary wartime writing.

Film starts at 7:30, discussion to follow.
FREE admission; $5 donation suggested.
Beverages will be available, but please leave food at the door. 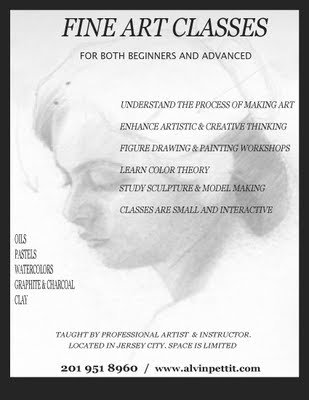 Beginning June 1, 2011, we will start conducting Art Workshop Classes on Monticello Avenue. For anyone who has ever wanted to learn how to paint, draw, or make sculptures, now is the time.

Supplies: a supply list will be sent to you upon signing up


*A percentage of all proceeds made from our classes go to the MONTICELLO COMMUNITY DEVELOPMENT CORPORATION.
Posted by fishwithbraids at 7:27 PM

June 17, 7 - 9 pm,  Grace Church Van Vorst, 39 Erie street
Calling all teens. Here's your chance to take over the mic. Do you sing, write act, dance? Come on over to Grace and strut your stuff.
Posted by fishwithbraids at 7:21 PM

Headliner
LOUIS KATZ
Born and raised in Los Angeles, Louis's comedy career began at the incredibly early age of 9 when as part of a school project he submitted several jokes to "The Tonight Show," two of which were read on air by Johnny Carson.  After graduating from UC Berkeley, he began performing stand-up throughout the Bay Area and quickly made a name for himself. He is now a professional comedian based in New York who can be seen at clubs and colleges across the country. Louis has performed at the Montreal "Just for Laughs" Comedy Festival, the Atlanta "Laffapalooza" Comedy Festival, the Amsterdam "Toomler International" Comedy Festival and the Vancouver Comedy Festival. He has appeared on NBC's "Last Call with Carson Daly," Comedy Central's "Live at Gotham," Jamie Foxx's "America's Funniest Comics," and HBO's "Down & Dirty w/Jim Norton." His half-hour "Comedy Central Presents" special airs in early 2011, coinciding with the release of his debut comedy album, "If These Balls Could Talk," on Comedy Central Records. Louis also produced a series of short films for Adult Swim's superdeluxe.com
Posted by fishwithbraids at 8:39 AM

Break out those poodle skirts and bobby socks or your best Rockabilly gear. Practice your jive and jitterbug. We're turning back the clock tonight with authentic 50s tunes spun by WFMU DJ MEGHAN McKEE. 50s style cocktails - Cherry Cola Ice Cream Float (with an extra kick of course) and Spiked Punch. Wear a COSTUME and get 10% off your tab. Best Costumes will win GIFT CERTIFICATES to Another Man's Treasure Vintage Store.
Posted by fishwithbraids at 10:29 AM