with green activities brought to you by the City of
Jersey City, Dept of Cultural Affairs,

DJ  Pastiche with minimal techno and experimental electronica,
an ipod mixer from Berlin

artists and designers, our true creative force from the metro area,
live sewing on the plaza,
live painting

the refrigerator public paint installation
(we use washable paint ) for your free expression
still encouraging to VOTE (May 14!!!)

Chill out and play in your outdoor livingroom,
Creative Grove
Posted by fishwithbraids at 8:06 AM

Victory Hall announces the reopening of DRAWING ROOMS,
our new site for contemporary art located at
180 Grand St, Jersey City, on May 2, 2013.

Now, six months after our Fall premiere was cut short by Hurricane Sandy damage, we are ready to begin year-round art exhibitions.

Posted by fishwithbraids at 6:57 AM

the pillowman by F.I.T.R productions

An Award-Winning Play by Martin McDonagh
Directed by Laura Moss

Tickets are $25 and can be purchased by visiting www.pillowman-fitr.com
Or reserved by emailing tickets@fitrproductions.com

Runtime: Two Hours including one intermission.

(New York – April 9, 2013) – F.I.T.R. Productions presents The Pillowman, an award-winning drama by Martin McDonagh.  Laura Moss directs a cast of four including Jon Dalin as Tupolski; Matt Kelley as Ariel; Priyank Rastogi as Katurian; Orlando Rivera as Michal.  The Pillowman will run at the historic landmark The Barrow Mansion, 83 Wayne Street, Jersey City, NJ 07302 for nine performances from May 17-26, 2013.  Complimentary wine and beer will be provided.

A number of bizarre child murders are suspiciously similar to the gruesome content in fiction writer Katurian’s short stories.  Living in a totalitarian state, he is threatened with torture by police eager to force him to confess to the crimes.  The Pillowman was nominated for Best Play at the 2005 Tony Awards and received the 2004 Olivier Award for Best New Play for its West End production.

The Pillowman plays for nine performances on the following schedule: Fridays-Saturdays at 8pm; Saturdays & Sundays at 3pm; and an additional performance on Thursday, May 23rd at 8:00pm

Tickets for The Pillowman are $25 for adults and can be purchased by visiting www.pillowman-fitr.com, or reserved by emailing tickets@fitrproductions.com.

The run time for The Pillowman is two hours including one intermission.

Laura Moss (director) is the former Artistic Director of Quo Vadimus Arts, a non-profit organization dedicated to cross-cultural artistic exchange.  With QVArts, she produced The Rwanda Folk Tales Project in Butare, Rwanda and the ID America Festival in New York City. She has also lived in Jerusalem where she managed international tours for the Palestinian National Theater. Her first film ‘Rising Up’ won Best Director at the Boston International Film Festival and screened at many festivals nationally, including the Atlanta Horror Festival and the Washington International Horror Festival. It was later distributed by SONY's online portal, Crackle. Theatrical directing credits include: Jew Pain (NY, SF Fringe), Descent (Edinburgh Fringe, AD) Death and the Maiden (Meisner Theater, NYC), One For The Road (Shop Theater).  Laura has performed her own writing in 9/11 Project (Edinburgh Fringe) and Burning Cities (NY Fringe). She is currently pursuing her Master’s degree at NYU’s Graduate Film school.

Founded in 2012, F.I.T.R. Productions stands for Fiction Is Turning Real, a company run by artists; for artists.  We value true ambitions and honest dreams. If you believe in your dream, we believe in you, and we will work with you and make every possible effort to turn that dream into reality. That is the ultimate motivation that drives us. That is our mission.

Matt Kelley has a B.A. in Theatre with concentrations in Acting and Directing. He was recently seen in Snapped Productions Much Ado About Nothing. He studies acting with Larry Singer at Larry Singer Studios.

Priyank Rastogi is elated to be a part of his all-time favorite play, The Pillowman and to play his dream role, Katurian. Recent credits: Snapped Productions’ Much Ado About Nothing (Verges), Love Creek Productions’ Antigone (Sentry), Love in Stockholm (Jonathan), Hotel Paradiso (Tabu), and Larry Singer Studios: Art (Marc), among others. Training: Scene Study with Larry Singer. He started directing plays in 2012 and loves it.

Orlando Rivera is overjoyed to finally play his dream role of 'Michal' in The Pillowman. NYC Credits: Thomas Bradshaw's JOB, The Shakes: Romeo & Juliet, #serials@theflea (The Flea Theatre), The Balcony (Horizon Theatre Rep), War of the Roses (HB Ensemble) and the 2010 NYIT award winner for Best Production of an Off-Off Broadway play, Balm in Gilead (T. Schreiber Studio). TV: Celebrity Ghost Stories. Film: The Execution, a BET indie short. Born in the Bronx , he's also a registered nurse, poet, a current member of the Bats, and resident actor of the Flea Theatre in NYC. He is extremely shy in real life.
Posted by fishwithbraids at 8:35 AM 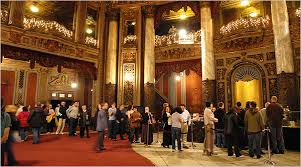 For advance sales and pricing, go to wpanj.org or the event page on our website.
For FOL, the money raised will help continue the great success we had with STAGEfest by funding the second annual festival in 2014.  For the WPA, the money raised will help match a grant they received for the WP LIVE! Art & Music in the Park event in September.
Featured entertainment is Petit Cubanoson, along with special guest surprises.
We will also be honoring John Gomez, noted local preservationist & historian.
The wine will be provided by Hoboken Vine and Hudson Vine, food pairings created in partnership with Chef Mory Thomas of the Food Network and NJCU Gourmet Dining's Chef Anthony Cinelli
If you are unable to attend, we hope that you will consider donating towards both organizations' continuing work.

And don't forget, this Friday, May 3, we'll have Sally Kellerman in person at our M*A*S*H screening, starting at 7:30 PM.


Posted by fishwithbraids at 12:58 PM 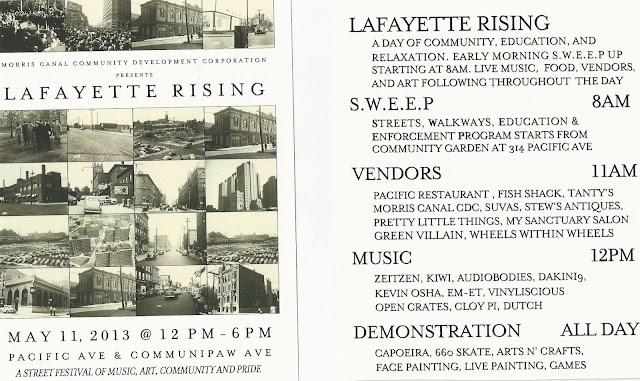 Posted by fishwithbraids at 12:51 PM