More Info
"Seeing Anthony DaCosta on stage is a perfect storm — talent, intensity, humor, passion, intelligence and charm — all bouncing off the walls of the room he is playing" (Court House Concerts). Anthony's music combines folk, rock, Americana and pop, plus what it's like to be "a very young man, with a very old soul" (legendary New York DJ, Pete Fornatale).

Now nearing 20 and a sophomore at Columbia University, in 2009, Anth...ony was named an MSNBC.com "Top 5 Up-&-Coming Young Singer" and a "WFUV-FM New Artist To Watch". In 2008, he released two, critically-acclaimed albums and was a Folk Alliance "Emerging Artist of the Year" nominee. In 2007, at 16, he became the youngest winner ever at the Falcon Ridge and Kerrville Folk Festivals.

Anthony has played major festivals, including Kerrville, Falcon Ridge, Philadelphia and Tonder (Denmark); showcased at SXSW and Tin Pan South; opened for music icons, like Loretta Lynn, Judy Collins, and Dan Bern; and, with one foot in folk, and the other foot loose and wandering into various other genres, released his eighth record in 2009, "Not Afraid of Nothing," which "has the lyrical quality of a John Prine album" (Twangville). He is currently halfway finished with his latest album, a rock/americana effort recorded in Brooklyn, NY and featuring a slew of wonderful NYC musicians.

Suggested artist donation is $15 per guest.

For more information and reservations, please respond on this page or email laura.foord@yahoo.com.

Wicked creatures, robotic monsters, urban characters, assembled wonders of a fantabulous
nature, all made with repurposed [i.e bottle caps, utensils, discarded plastics] or
purposeful materials [i.e. legos and resin cast materials] will populate the gallery.
You are welcome to meet them.

Opening Reception Shin-Dig:
Thursday October 14th, 7PM~10PM
with music by "DJ Johnny Large on the Decks"
Posted by fishwithbraids at 6:26 AM

The artist market, outdoor lounge, creative scene of indy enterpreneurs, designers, hoolahoopers, and neighborhood dwellers is back shining in it's understated glory.
Show off your creative side, come and dance, maybe your dog can dance?
You might discover your dogs music taste.
DJ Pastiche Oct 8 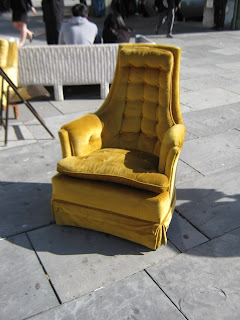 ‘REC’ follows a television reporter, Ángela Vidal, and her cameraman, Pablo, who cover the night shift in one of Barcelona's local fire stations for the fictional documentary television series While You're Asleep. When the firehouse receives a call from an old lady trapped in her house, they reach her building to hear horrifying screams -- which begin a long nightmare and a uniquely dramatic TV report.

Film starts at 7:30, discussion to follow
FREE admission; $5 donation suggested.
Beverages will be available, but please leave food at the door.

Free Screening: All About My Mother